Four stunning new builds as well as four brokerage Horizon yachts were on display during the show, which ran from May 23 – 26, 2019. The flagship display yacht was the new Horizon RP110 which, with a nearly 122ft LOA, was the largest Horizon yacht to ever grace the Australian coastline. The new RP110 was accompanied by two popular E75 motoryacht models as well as the debuting Horizon FD80 Skyline, which sold quickly to an Australian buyer just days after the show closed.

With an LOA of 121’10”, the new Horizon RP110 was a hit at the show with visitors traveling from all over the country to tour this impressive build. This is the third Horizon built for her Australian owner and features numerous customizations. The custom yacht is equipped with twin MTU V16 2600hp engines, the latest state-of-the-art Black Box Furuno navigation package, an OctoPlex system, upgraded 440/20X stabilizers, a Yacht Controller, and a retractable hydraulic sunroof. Beneath the waterline, Horizon fitted nearly 30 blue underwater lights around the entire vessel, which create a mesmerizing glow when they light up the deep navy blue hull at night.

Making its global debut and quickly becoming a show favorite for all who attended SCIBS, the FD80 Skyline is one of the latest models from the acclaimed Cor D. Rover-designed Fast Displacement Series. Customized for the Australian market and offering the same impressive space as seen in the larger yachts in the FD Series, the FD80 Hull Two was noticed for its well-planned layout and option for crew if desired. The yacht’s enclosed skylounge, on-deck master stateroom, beach club, bridge deck bump outs for docking, and bold exterior design were among the numerous features that had visitors talking and resulted in the quick sale.

Appearing alongside these impressive luxury yachts were two Horizon E75 motor yachts – the most popular Horizon yacht model for the Australian market. Within an 18’6” beam, the E75’s interior features increased volume and numerous lounging areas. Entertaining with family and friends is a pleasure thanks to the E75’s creative foredeck seating area, exterior bar on the boat deck, and incredible aft deck offering luxurious, shaded relaxation. This is a yacht that defies size perception and provides the amenities and space of a far larger yacht within a stylish profile.

The 2019 SCIBS was one of the most successful shows the Horizon Yacht team has seen in years, with resulting sales in both new and brokerage yachts – with the quick sale of the new FD80 Skyline underscoring the success of the FD Series. 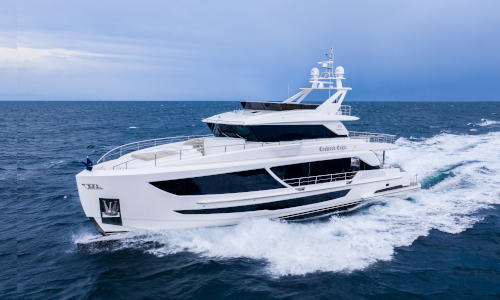 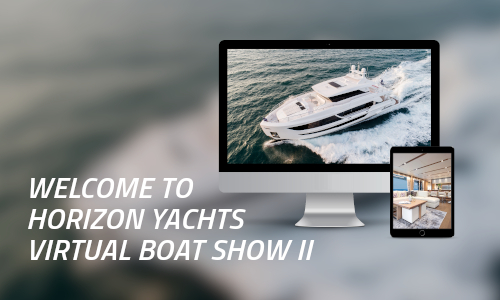 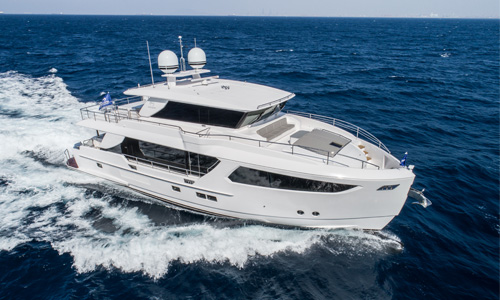 Horizon Sells a New FD80 to an Asian Owner