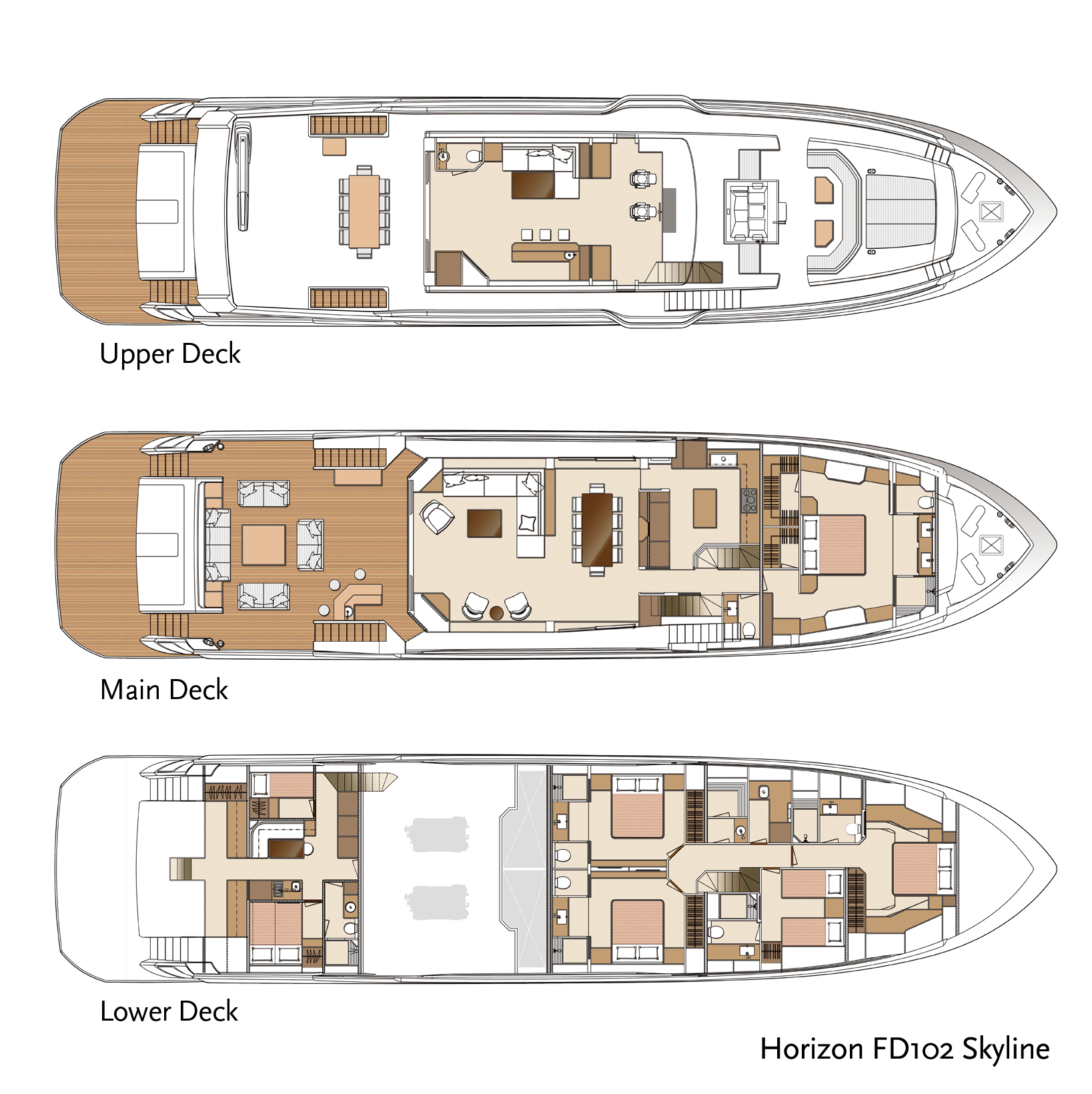 The Perfect Fit: How One Owner’s Vision Led to the Design of the New Horizon FD102 Skyline Superyacht

Share
Horizon’s Fast Displacement Series has been wildly successful since it was first introduced to the world at the Fort Lauderdale Boat Show in November 2016. When the head-turning styling, voluminous interior and high-performance hull design that characterizes this series is paired with Horizon’s willingness to customize for its owners, the result is a continuously evolving series that improves with every new model.

Such is the case for the brand new Horizon FD102 Skyline, the first ‘superyacht’ of the series, which now includes the FD77 Skyline, FD85, FD87 Skyline and FD125 Skyline models. A potential buyer was interested in a bigger version of the FD87 Skyline and requested a yacht with an extended range and more superyacht amenities and design aspects, such as walkaround decks; so Horizon and series designer Cor D. Rover customize a yacht that suited this owner’s vision. The result was the FD102 Skyline, which offers many design and layout features not typically found on a 100ft motoryacht.

At an overall length of 105 feet, the FD102 Skyline offers a wide 24’2” beam and large outdoor spaces accessed by a unique walkaround design. Within a voluminous interior, the FD102 Skyline offers double salons, an on-deck master stateroom, and a spacious four-stateroom-layout on the lower deck. A walkaround deck on the bridge deck level maintains the privacy of the interior spaces while providing a seamless transition between outdoor entertaining areas, which include a unique forward deck arrangement featuring a u-shaped settee and a Jacuzzi tub just forward of the bridge and a sprawling sunpad on the foredeck. A lounging/dining area and space for tender stowage is located aft while a spacious beach club and large aft deck area are found on her lower levels.

“The innovation of the FD102 Skyline shows Horizon possesses strong design and construction abilities that allow us to turn an owner’s dream into reality,” said Horizon CEO John Lu. “Since the series was introduced with the first FD85 in November of 2016, the feedback from owners and potential clients has served to further streamline the FD102 design and create a truly remarkable ocean-going superyacht that offers performance and stability as well as spacious interior and exterior areas.”

At the core of the FD102 Skyline is the flexibility in layout that allows this voluminous yacht to be tailored to her owner’s vision. The potential buyer was so pleased with the design that he signed the contract at the Monaco Yacht Show. The first FD102 Skyline is expected to launch in 2020.